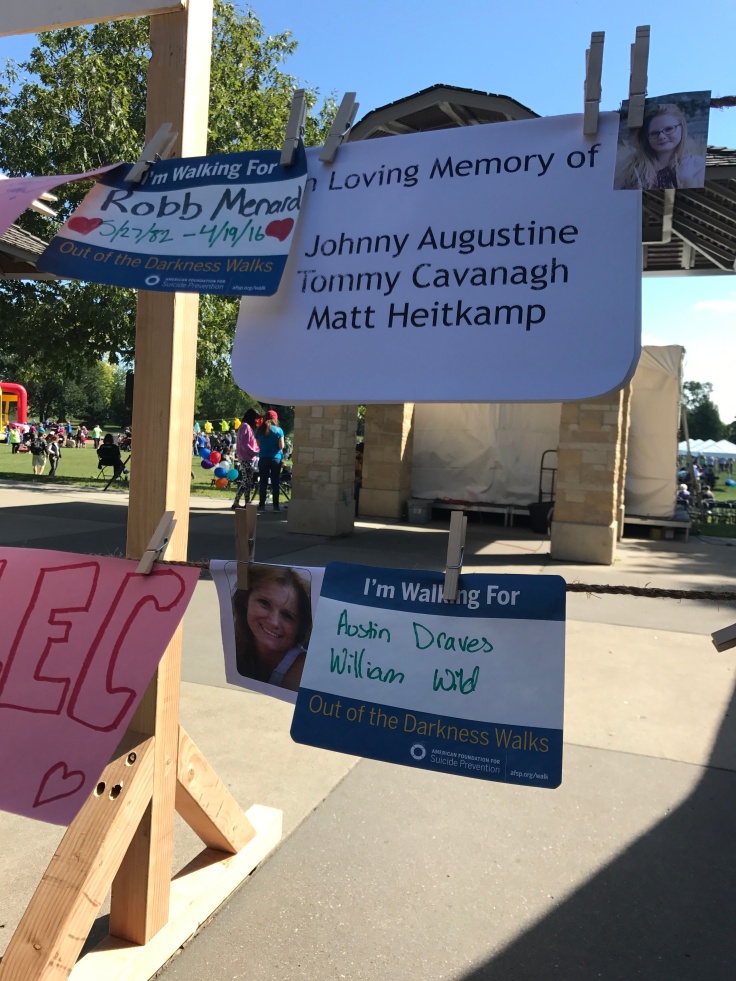 It’s like you knew, all along.  You knew how much hatred and despair this world was in. You knew the downfall of this world we live in.

The massacre of shootings, all the bad in this world.  You saw it.  You felt it.

Your heart was too kind and gentle for this corruptive world we live in. You saw the world for what it truly is, and it’s only getting worse.

You fought a battle every day of your life. You fought to try to survive in this world.  And this world was never meant for you.

I did something extremely hard the other day, and I did it all for you. I attended Out of the Darkness, a walk to prevent suicide.

I couldn’t believe the turnout, how many other people that had lost loved ones to suicide.  It was incredible to see how many people were there, and so incredibly sad at the same time.

I dedicated my walk for you. I tried to raise money, to help others like you Austin. I was proud I could reach my fundraising goal.

As I was walking through the event, they had a wall where you could write something on a card and post it. To write something about the person who you lost, to remember them and to honor them.

I walked by and saw your name.  “I’m walking for Austin Draves.”

My heart dropped. My stomach sank.  The tears started to stream down my face. I felt numb. To see your name, along hundreds of others who are gone, made me completely ill.

The shock and the realization that you are not here anymore hit me, like a brick wall. It’s like it still happened yesterday.

The rawness of it all, all came flooding back.  I started crying, because I didn’t know who had written your name and posted it on the wall.  But I knew it’s because you had so many people who loved you.

Hundreds of pictures and names, of people who I would never know were hung all around the wall.  People who had taken their lives, and people who they left behind were now honoring them.

We walked by a table, with thousands of multi-colored beads.  Each color represented the relationship you had with the person who you lost.

There were hundreds and hundreds of people who walked that day.  I saw how many people lives were affected by suicide, and it overwhelmed me.  It’s becoming one of the leading causes of death in our world today. I never knew, here in the Twin Cities that there were so many losses due to suicide.

I was encouraged that it’s becoming an issue on people’s radar. I am proud people are starting to talk about suicide, mental illness and depression.

Acknowledging it, is the first step.  Talking about it is the next step.  The walk really opened my eyes.  I knew I wasn’t the only one struggling to survive after losing you.

But I never knew how many people that were right beside me every day, who were also struggling.

I am going to try to one day be an advocate for mental illness.  I’m trying to be one right now, by writing this blog and by sharing my personal struggle.

I’m never going to stop talking about you. I’m never not going to think of you, every second of my day.

I still am and still always will be proud to call you my brother. You will always be my brother, nothing will ever change that.

Until next time, so it goes.

One thought on “Out of the Darkness”